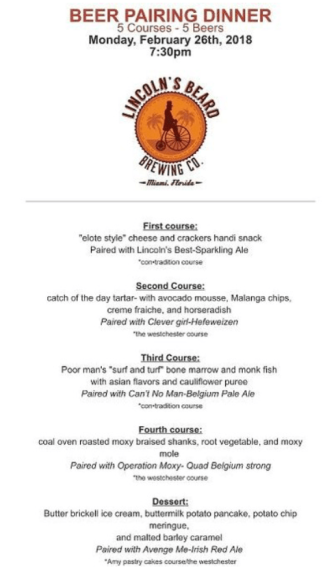 Probably one of the most amazing beer pairing dinners I’ve been to thus far; even though I’d be lying if I didn’t say that each dinner ends up being better than the last.

This time around Con-Tradition (previous beer/wine pairing dinners) teamed up with The Westchester (our first beer pairing dinner) which has been a reunion a long time in the making and what makes it even better than that was the fact that the beer that this dinner was paired with was Lincoln’s Beard Brewing Company!

What was special about this dinner was the fact that these two forces came back together after having had worked together a while back at Michael’s Genuine. I had the pleasure of being in attendance the day the chefs were tasting beers at Lincoln’s Beard deciding which they would use for the dinner.

The three chefs that were throwing down that day were Chef Jason Arroyo, Chef Daniel Ramirez & Chef Amy Kalinowski. Chef Arroyo & Chef Ramirez each had two courses on the menu and Chef Amy rounded it out with a dessert! 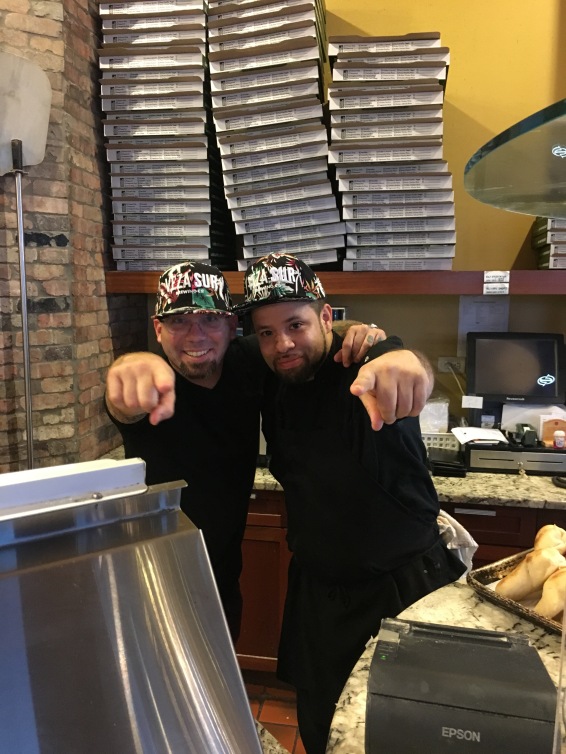 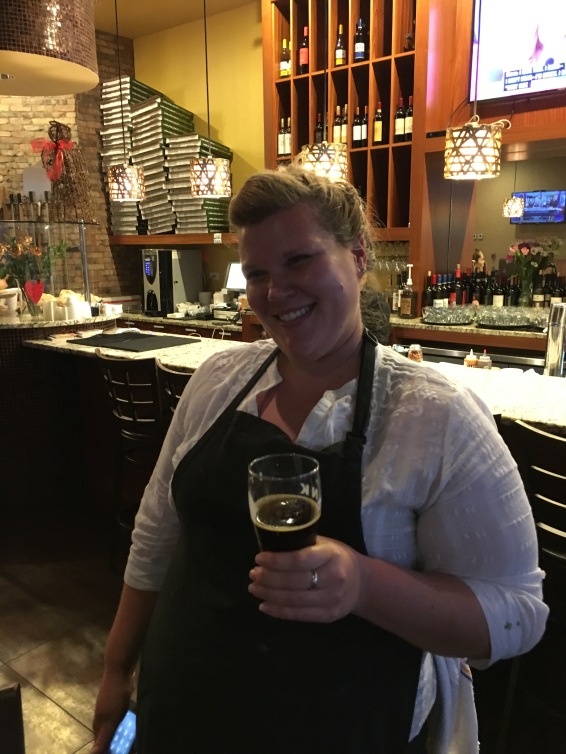 I hope you’re ready; buckle up and get ready for the ride!

The first course was was an “elote style” cheese and crackers which was paired with Lincoln’s Best-Sparkling Ale. This was definitely corny (pun intended) and you got a nice kick with the paprika topping. The creaminess and soft flavors from the sparkling ale cuts the strong corn flavor from the elote style cheese, this was a great pairing because you got a soft serve style corn cheese and then a nice puffy, crunchy cracker that was literally bite sized… for me at least. Fun Fact: the boys over at Lincoln’s Beard brewed this ale for WWII vets that would hang out at the brewery. It was brewed in this style for similar beer tastes that the vets drank in their time. (A Con-tradition dish).

The second course was a catch of the day tuna tartar with avocado mousse, Malanga chips, creme fraiche and horseradish which was paired with Clever Girl-Hefeweizen. The freshness of the tuna with the hints of lemon and the avocado mousse with the crunchiness of the Malanga chips was a symphony of flavors on your palette; and then with the sip of the hefe, there was a nice wheaty, crisp taste that was added to all the other flavors added from the dish. (A Westchester dish).

The third course was a Poor mans “surf and turf” bone marrow and monk fish with asian flavors and cauliflower puree which was paired with Kant No Man-Belgium Pale Ale. This ale is made with sriracha yeast hops which gives this beer a refreshing kick which was a nice pairing with the smoky flavor of the bone marrow and the juiciness of the fish and cauliflower puree which was kind of like a hummus topped with crunchies that added an extra layer of flavor. The ale also added a nice hoppiness which again was a beer that added another distinct flavor to the already flavorful dish that we were provided. Fun Fact: The hops were provided from the good people at Sapporo Brewery (A Con-tradition dish). 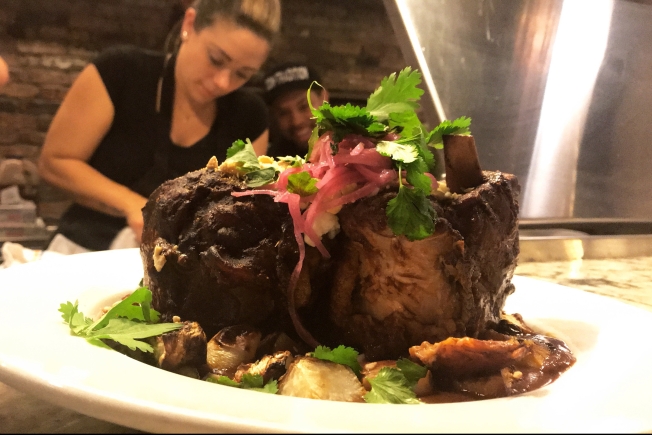 The fourth course was coal oven roasted Moxy braised shanks, root vegetables and Moxy mole paired with Operation Moxy-Quad Belgium Strong. This was a heavy hitter. The shanks and the mole were both soaked with the Belgian Quad which added a great flavor to the meaty dish that also soaked up every last drop. Not only did the meat literally fall of the bone when touched, but it was soaking in a mole that was made with the Belgian Quad as well and the heartiness of the root vegetables added another layer of taste when you sipped that full bodied Operation Moxy right after. The quad was a bit sweet, slightly peppered and went down smooth. (A Westchester dish).

And finally, right before the point I had to unbuckle my pants, DESSERT! Which was butter brickell ice cream, a buttermilk potato pancake, potato chip merengues and malted barley caramel which was paired with Avenge Me-Irish Red Ale. This was amazing because there was so much going on, but it all came together so well. The sweetness and the softness that the ice cream provided with the caramel that was made with the malted barley from the Avenge Me Irish Red Ale & the slight crunchiness of the merengue and softness of the pancake made you want to stand up and sing. Then washing that all down with the Irish Red that provided balanced flavors of malts, hops and a slight citrus taste which also had a sweetness that hinted at caramel. IT all came together and made one amazing dish and an amazing end to an already incredible evening (A Chef Amy dish).

As I said before, this was a reunion tour of sorts as all three chefs had worked together back at Michael’s genuine. They have stayed connected over the years and are great friends to this day and you can definitely tell how amazing the vibes in the kitchen were with how delicious each plate came out. If you haven’t tried either of these chefs creations, you are missing out.

The next beer pairing dinner will be coming soon and you already know I will be there, will you?

My name is Haidar Hachem and welcome to my life! I am a currently a civil engineer that has many designs all over Miami; while civil engineering may be my day job, at night, I run! I started a non-profit "Samurai Piggy & Friends" that helps kids with cancer, diabetes, special needs & the less fortunate. And when I'm not raising money, I coach clients who want to reach their time & distance goals in running. I have been a type one diabetic since the age of two and a recent cancer survivor as well. I want to show people that if you put your mind to it, you can accomplish any goal you desire! I just love to live life and go out on adventures; and all those adventures will be cataloged here for your enjoyment! So grab a drink, sit back and enjoy! View all posts by samuraipiggy